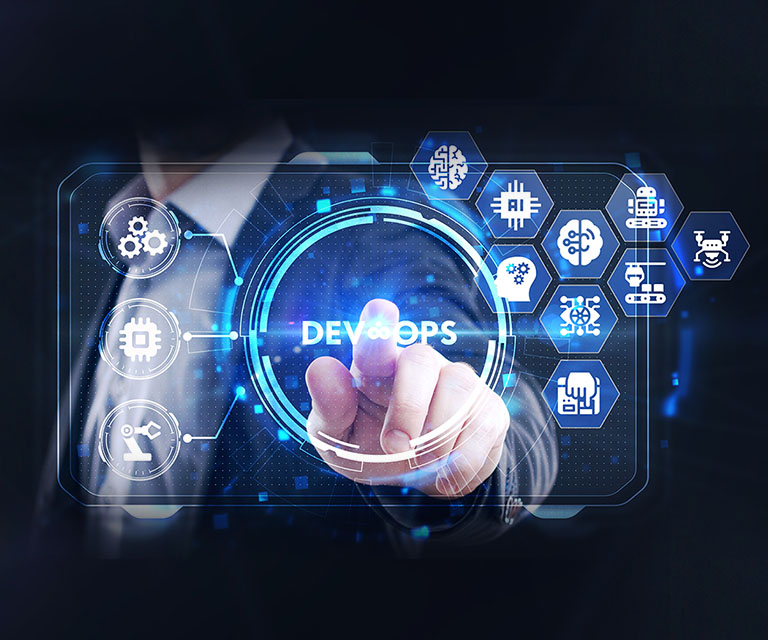 The infrastructure networking world is transitioning rapidly towards software-defined networking and cloud networking. In the wake of rising interest in such solutions, network operators need to scale and move along with this changing way of network management. To satiate the demand for next-generation solutions that can keep up with this pace of change, operators need to acquire and deploy solutions that are sustainable and efficient. Although Network Automation can help operators accelerate network operation to some extent, it's important to move further from network automation and to a mature, self-efficient model.

For more details on how the new network operations can be managed with automation, analytics and AIOps, read our white paper on future of managed network services.

In this paper, we will discuss in detail how to embrace network automation with the NetDevOps approach.

What is covered in the whitepaper?

NetDevOps is a term derived from the DevOps for the network. DevOps is the process of combining a development and operations process to achieve faster delivery of software through automation, collaboration, feedback, and improvement. 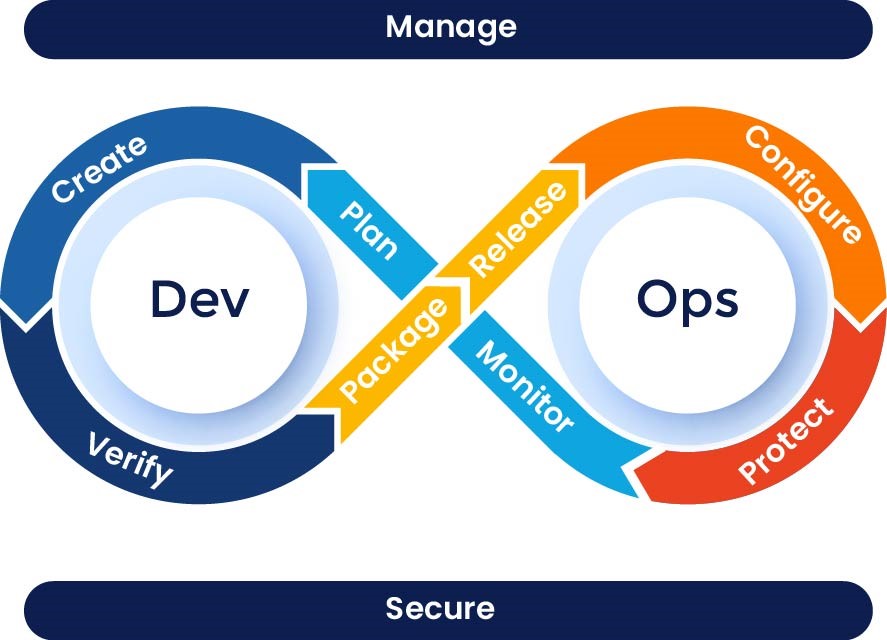 NetDevOps is the approach to bringing the DevOps principle into Network Automation. In other words, creating a structured practice for changes, testing and validation, also known as, Network infrastructure as a Code (NaaC).

According to a research by Gartner, by 2025, 25% of enterprises will automate more than half of their network activities, an increase from less than 8% of enterprises in early 2022. Further, the researchers noted that there has been an increase in interest from enterprises in technologies, such as CI/CD (Continuous Integration, Continuous Development), agile, infrastructure as code or IaC, and DevOps.

As per a survey conducted as part of the research, networking leaders often cite network automation as the top 3 strategic priorities in their transformation initiatives. [1] Simply put, NetDevOps addresses the entire lifecycle of network operations, providing an end-to-end solution to manage and optimize network automation.

To scale up the efficiency of the network operation, network automation is a must. But there are several approaches to executing this successfully. Here are some of the approaches that enterprises need to understand and consider.

What are the challenges associated with Network Automation?

While there are various approaches for Network automation, almost 70% of enterprises have below 25% of automation implemented. [2] Although automation seems like a silver bullet solution, it has drawbacks that need to be addressed before peak efficiency can be achieved.

Let us now look at some of the barriers that Network automation faces.

Maturity of the automation platform

Maturity of the automation tools and the platform is a key consideration when assessing the efficacy of network automation. Existing tools have ‘yet to mature and enough to serve’ several use cases for the market. There still exists a need for awareness of network changes for the tools.

Further, enterprises need to cultivate confidence in the tools which still remains a major barrier. Enterprises still fear that carrying out a change could result in potential misconfiguration propagation with a large impact, creating another barrier.

While the network tasks are the same, the various network domains remain non-standard.
Even within the single network, domains such as LAN and several network devices are non-standardized or from different operating systems, make, model, or manufacturer etc. This creates compatibility issues and complexities in the network.

A major barrier to network automation is that the sector currently faces an acute shortage of automation and development skills for developing and deploying scripts and bots.

Notably, all the vendors do not support the full span of change, incident and service requests and at times are focused on specifics.

Network being the backbone of the infrastructure, many organizations fear making changes or avoid implementing network automation in the fear of unexpected impacts on existing regimes.

Overcoming the barriers of Network Automation with NetDevOps

Aligning to and adopting DevOps

Enterprises who have adopted the DevOps culture to the software, and other infrastructure components such as Cloud, Compute, etc. find it more reasonable and are likely to extend the same towards the network. These organizations are also able to easily adopt it.

See change as a routine

Often network operations teams avoid the risk of change and try to maintain the status quo. However, enterprises who see network changes as routines are more likely to find network automation implementation easy and complete the process faster.

Enterprises who remain open to adopting scripting, coding, and programming skills are expected to adopt network automation much faster.

Having a person with a programming skill set as part of the team is one of the best scenarios. Since an engineer brings a T-shaped skill set which means adding depth to the understanding of networking and breadth of network programming and vice versa as a mix in the team.

NetDevOps over the script-based automation

Network engineers traditionally find the script-based automation using tools like Ansible and Python much easier. Many engineers run the script and create standalone BOTs or scripts to do tedious, mundane, and repetitive tasks. This is one way of using network automation.

But NetDevOps takes a much more efficient, highly automated approach to network operations. Below are some of the reasons why NetDevOps is better than Script / BOT-based automation: 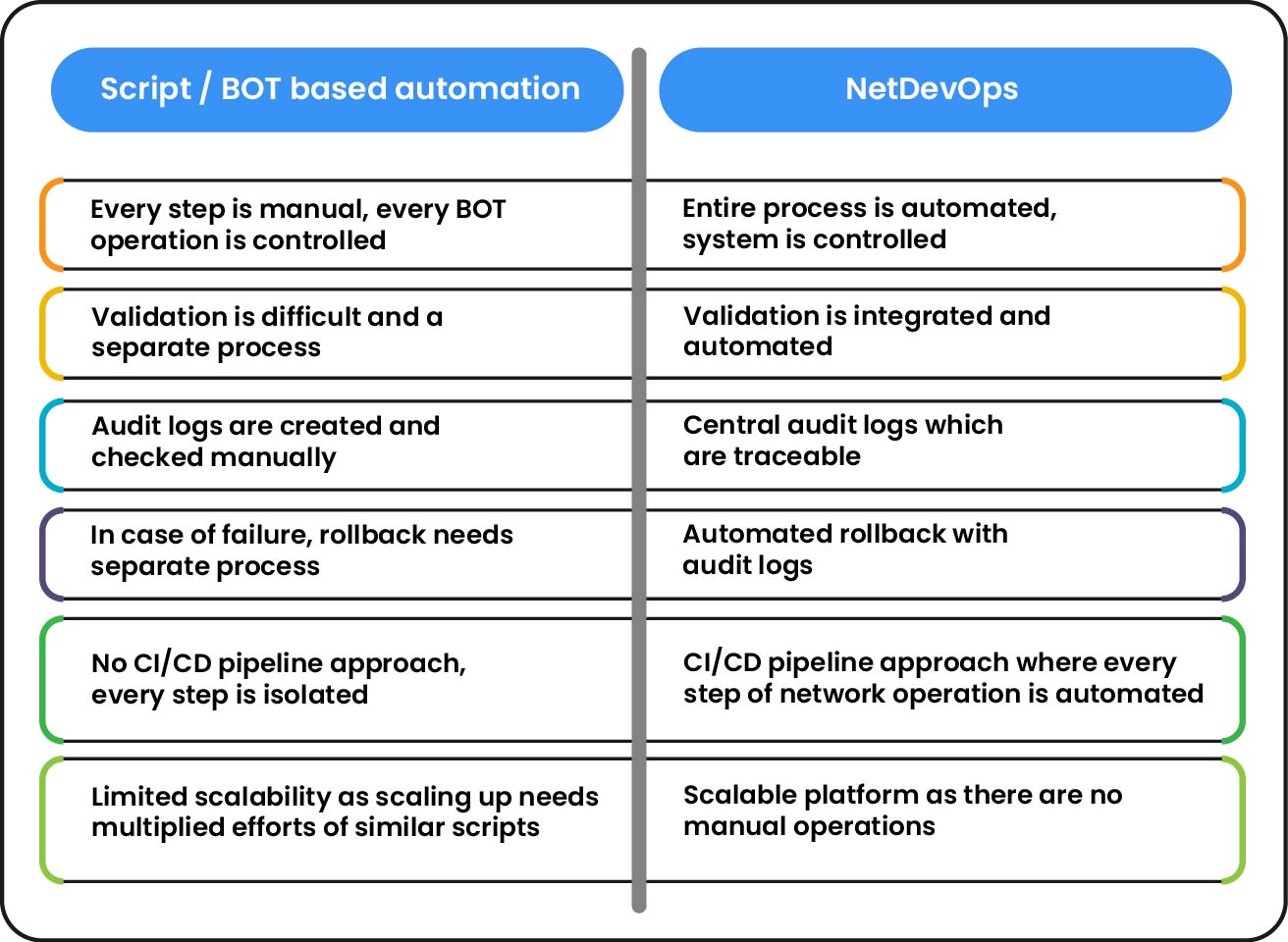 NetDevOps can simplify the majority of the network operations tasks and sits in the network engineers’ space. The practice interacts with ITSM platforms, updates tickets, and also delivers feedback to the monitoring, observability, and AIOps platforms. 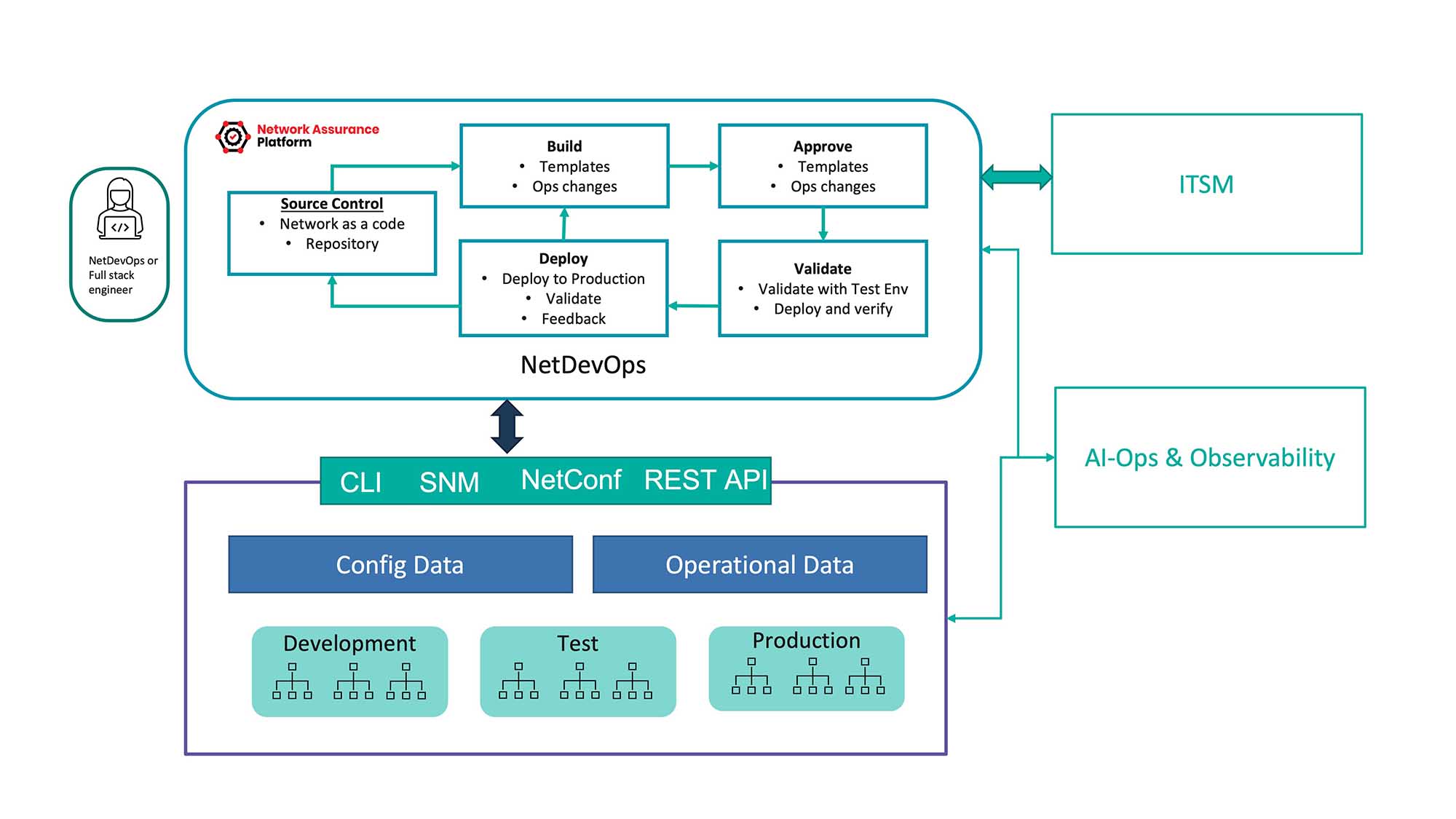 Operating with observability and AIOps

Enterprises adopting NetDevOps will increase agility, scalability, and the speed of the network operation. While doing this NetDevOps tools collects a lot of data which includes system state, before and after status, validation statuses, network performance data, etc. These data sets are useful and important to connect with the observability platform and feed into the AIOps system to have effective correlation, analysis, and get input from other infrastructure components.

It is good to have certain pre-requisites and maturity in the enterprise network environment in order to implement and adopt NetDevOps.

Microland’s NAP and what it brings to the table

Here are some of the key use cases and examples of NetDevOps that Microland’s NAP simplifies:

Network as a code

Enterprises can adopt NetDevOps without worrying about acquiring or deploying complex tools for code and repository.

For those network engineers, who don’t want to get into many underlying toolkits of NetDevOps, Microland NAP provides a simplified interface. The interface makes it easy for network engineers to use NetDevOps use cases much more effectively. It simplifies the way to interact with these tools without having to worry about the inherent complexities of the tools.

The NAP platform provides proactive and augmented troubleshooting based on the defined algorithms or feedback received with the help of AIOps systems.

The platform offers abstracted and standard multi-vendor supported change catalogs for various types of devices - standardized or non-standardized - with a common data model.

By achieving network automation with the NetDevOps approach Microland takes customers to MinimalOps and towards a NoOps future. Microland helps you adopt NetDevOps for network operation in a much simpler and easier way, helping enterprises scale up the maturity of network automation, consequently improving the user experience for the enterprise users.

Ramesh N.G, Senior Director - Digital Network & Security, Ramesh comes with over 22 years of experience in driving innovation in networking services with key focus on SDN Solutions & IPs development. Ramesh is part of several leading industry forums in the Networking industry such as OpenStack, IEEEE, etc. In Microland, Ramesh’s focus is on driving our solutions & IP development in SDN, Automation in Network, and Cyber space.