The Networking service, code-named Neutron, enables operators to leverage various networking technologies to power their cloud networking in OpenStack. The Networking service also provides an API to configure and manage a variety of network services ranging from L3 forwarding and NAT to load balancing, perimeter firewalls, and virtual private networks.

There are two major decisions which define the capabilities of OpenStack Network-as-a-Service; the Neutron Plugins and the type of Provider Networks.

Again, the choice of Plugin and the Provider Network configuration defines the self-service capabilities. For ease of understanding, Neutron has divided feature supported into two groups: 1) General features and requirements for most common implementation and 2) network isolation technologies supported. 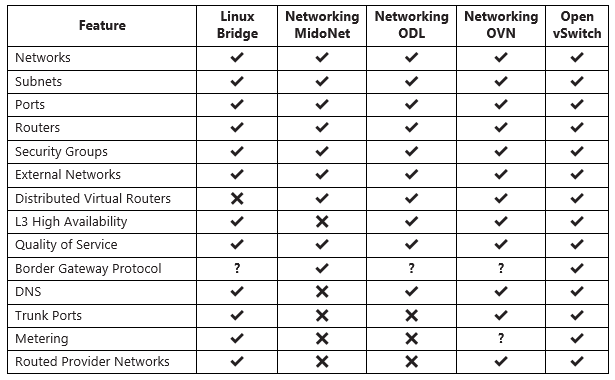 To summarize, designing OpenStack network requires us first to finalize all the network self-service options to be made available for end-user consumption in near and distant future. Next is to choose the appropriate plugins to support those services concerning network devices. To utilize more advanced features like Auto-Scaling using heat templates LBaaS should also be included in your implementation roadmap.